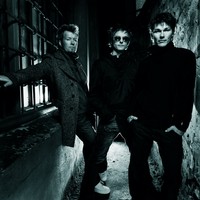 https://www.coveralia.com/letras/presenting-lily-mars-a-ha.php
"Good morning," says father Mars
Presenting a salesman's cheerful face
His mouth is never shut
As he strides from door to door to door to door
Watch his face as he puts his foot in my door