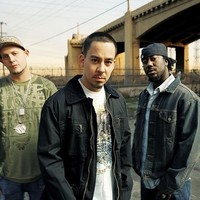 [Mike's father & Mike's aunt]
"I was a kid in--I was a--I was a baby and a young kid in camp."
"Yeah, soon as war broke out, the F.B.I. came and they took some people from Sampedo. They just come to the house, and you have to come. They just, you know, 'We're from the F.B.I and you're one of the suspicious person."
"They put them in horse stalls."
"They took Mr. Ni, and people couldn't understand why'd they have to take him. Because he's just an, you know, innocent laborer."
"They put them in assembly areas until, uh, they worked out the logistics to transport the people to their final relocation camp."
"We--They had the assembly center."
https://www.coveralia.com/letras/kenji--interview-version--fort-minor.php
"What they did was they put straw on the floor for bedding."
"Then all the Japanese had to go. Each family had a number, so they had their number on this, um, duffel bag. So, they said you have to move out certain day, but you know."
"The barracks were like quads; they had four sections, so you could have four families in a row. There were no rooms." (Mike Shinoda: "Yeah?") "It was cramped, and then, to get your privacy, we used to put up partitions. Sheets. The walls were just boarded with tar paper."
"I-I remember my husband said 'Oh, we're gonna stay til 'last.' Then my husband died before they closed the camp, in the camp. Uh, we had four kids and [?] was born in camp. While I was there in three years, I never went out of camp."
"Before the war, my father had a mercantile. It was very successful. But, when we first got back from camp, it was pretty, pretty bad. When we came back from camp, we were very poor. We used to, we used to use newspapers for wallpaper. What we ended up doing was we--we day labored. I remember going out and we picked grapes and worked on, you know, farms to make a living."