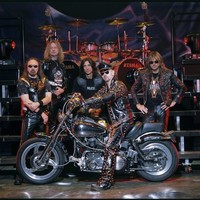 I came across a smoking field, pulsating afterglow
I saw a searing flash of light erupt and skyward go
I staggered back in dazed surprise
What was it I had seen?
And as I stood there mesmerised I heard my spirit scream
Invader invader nearby
Invader, invader is nigh
This is the first of more to come in carefully planned attacks
If it is so we must prepare defences to fight back
The call is out throughout the world
United we must stand
To build a line, strategic force, they will not take a man
Invader invader nearby
https://www.coveralia.com/letras/invader-judas-priest.php
Invader, invader is nigh
When they come to take control every man must play his role
They won't take our world away when the children we leave
Will have to believe in today
We warn you now you things out there
Whatever you may send
We won't give in without a fight, a fight until the end
With vigilance by day and night our scanners trace the sky
A shield is sealed upon this earth, a shield you won't get by
Invader invader nearby
Invader, invader is nigh