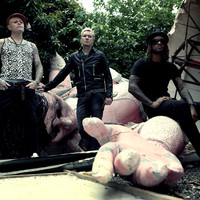 [Chorus: Prodigy]
Field Marshal P
Soldier you step inside my room solute (solute)
At attention, pay attention
When P say something it's the truth
The Universe is my witness (uh-huh)
It's all what these demon cops tried to do
It's all our leaders that got hit
It's all the shooting that hit our leaders too

[Prodigy:]
Nigga I'm a vet, on the streets I'm a King
Push it to the maximum when I do my thang
My words will shock you, my songs will scare you
You fit to die real soon, let me prepare you
For that rectangle box, you deserve to die, you dirty lil fuck
You ungrateful, un-loyal, I'll have my nigga Un take care of you
Or my nigga Fox, you just light work, real simple
I'll pick up the pistol and hit up your temple
Demolish your rental, you cheap fuck, bury 'em in his cheap suit
Ashes to dust, you're not a revolutionary, you're a punk
You're not a rebel soldier; just leave it up to us
I'm a insurgent, I put work in, check my card, listen to my verses

[Prodigy:]
Nigga I'm a pro, in the rap world I'm a god
I only hear the facts; I'm death to your garbage
I only spit the rap, if the shit's real
I only lie to the police on the real
https://www.coveralia.com/letras/field-marshal-p-prodigy.php
New York Pricks and Dicks (NYPD) know the deal
They wanna do the kid like my nigga Sean Bell
Fuck that, it be a racist cop buried there
With the bagpipe music, I'll burn another L
To amazing grace, what a perfect song
Was blind but now you see us, it's not a game at all
Y'all some slimy snakes, bunch of reptile cops
The government and military all corrupt
I ain't on that shade the world shit
I'm a share my experiences, been through hell and back
Now I'm right back in hell, dunn I'll be right back
Yeah, but in the meanwhile...

[Un Pacino:]
Cops said a nigga tried to get you a charge
Get cameras, 'cause they might plan some shit in your car
But yet the god just talking the fact he got lips
They gave 'em 42 months; he got bagged with that grip
Word is bond, I was just right there
I've seen the judge's face, military mind
I preached to nigga "fuck jakes"
The Hip-Hop could suck my dick
Down right they trying to hate on us, destruct our clique
Big Joe was in the Garden the night of Sean Bell death
Had plans to kill a nigga the minute Sean Bell left
Trying to slant the victim's characters for wrong judan
Niggas scared to hang around me like "what's wrong with Un? "
But fuck 'em, nigga down to take bullets when we were leaving
And we don't get mad we get even
Before you violate my rights and start looking
Shit is candid in the car you're searching, I got footage