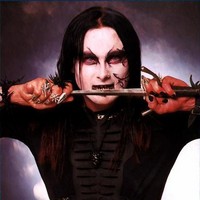 'Something thicker than despair
Rides upon the midnight air
The smell of blood, the taste of prey
We spy you hiding Gilles de Rais'

Nightingales sang of tragedy
Whispers were made of blasphemy
Vain, insane, this brute aloof
Drew tainted veils over bitter truth

The stairs ran helterskelter
His bedchamber besieged
By phantoms who sheltered
In it's furs, remorse
They sought to overwhelm him
Like a lantern of disease
That shone on rotten faces
Of those murdered out in force

Fleeing ghosts so indisposed
To his Satanic love
Of children dragged from cellars to his feast
He rose, a carnal wind opposed
To those that sat above
Tearing out into the forest like a beast

The night wind sang of tragedy
Whispers were made of blasphemy
Vain, insane, this brute aloof
Drew painted sails over naked truth
https://www.coveralia.com/letras/darkness-incarnate-cradle-of-filth.php

Then once besotted, knotted trunks now grew
Rotten, venereal, cancerous, blue
The clotting of his heart to a rank cantankerous tune

[Gilles de Rais:]
''Death is only a matter of a little pain''

Beneath the sallow moonlight
In a wonderland of pain
Gilles fled back through the castle
Terrified and drained
He sought his deep red velvet bed
And the sleep it preordained
Exhausted, forced into the dead
The creep of nightmares came again

Corpses tore at his legs and knees
As he clawed to the cross, begging reprieve
From a Lord that soared above the awful scene

He sobbed and wept, no voice was left
To scream, the dream was not drubbed yet
He heard the horrors hiss beside him, 'Herod, you'll regret...'

'Who hears the tears of nightfall?
Who steers the spears so spiteful?'